The People’s Climate March will be held on Sunday, 21 September 2014, when more than 100 000 people are expected to march in New York in support of climate action. In total, more than 2 000 events are planned around the world, making this the largest climate rally in history. 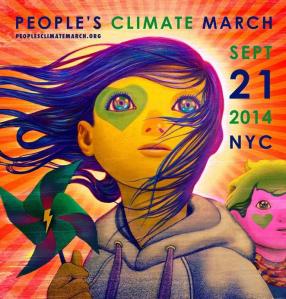 Even UN Secretary General, Ban Ki-moon, will participate in the People’s Climate March in New York. “I will link arms with those marching for climate action,” Ban told a press conference. “We stand with them on the right side of this key issue for our common future.”

The march will be followed by the UN Climate Summit on 22 September 2014 when at least 120 world leaders will convene in New York to discuss the road to a climate treaty in 2015. While not an official UN negotiating session, leaders have been invited to announce “significant and substantial initiatives to help move the world toward a path that will limit global warming.”

The challenges associated with climate change, and need for a fundamental shift to renewable and clean energy, are critical issues which inform my fundraising and awareness-raising campaign in support of the work of Greenpeace Africa linked to my participation in the Last Desert Race in Antarctica.

In a hard-hitting video message in support of the People’s Climate March and aimed at the world leaders who will be attending the Climate Summit, Greenpeace International Secretary General, Kumi Naidoo, has urged world leaders to take decisive action in response to climate change. “Enough words, now is the time to walk the walk.”

In addition, 350.org released a new documentary, Disruption, which looks at the consequences of ignoring climate change and aims to inspire people to join the march and the larger environmental movement.

Local marches will be held in Cape Town, Johannesburg and Durban.

Click here and here to find an event in your region and join the march for climate action!