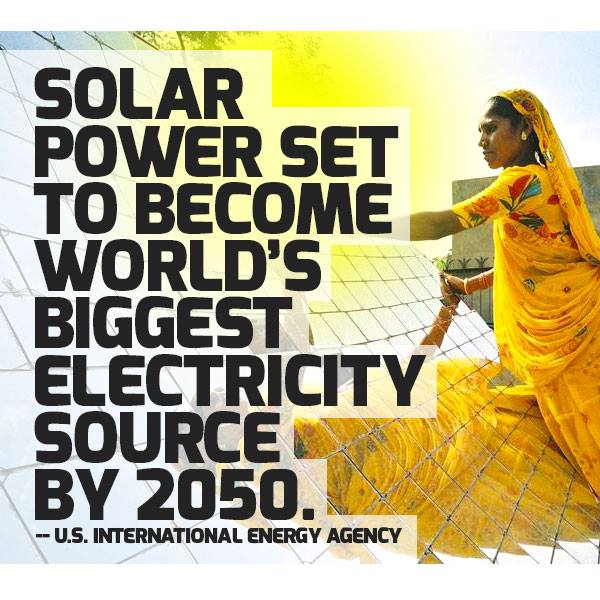 The Future is Solar

The IEA issued two reports earlier today which state that the sun could be the world’s largest source of electricity by 2050, ahead of fossil fuels, wind, hydro and nuclear. The reports highlight how solar photovoltaic (PV) systems could generate up to 16% of the world’s electricity by 2050 while solar thermal electricity (STE) from concentrating solar power (CSP) plants could provide an additional 11%. 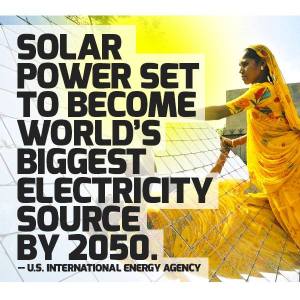 The IEA predicts that up to 4 600 gigawatts of photovoltaic capacity could be installed by 2050, up from about 150 gigawatts at present, requiring an average annual investment of $225 billion per year.

In addition, these solar technologies combined could prevent the emission of more than 6 billion tons of carbon dioxide per year by 2050 which is more than all current energy-related CO2 emissions from the United States or almost all of the direct emissions from the transport sector worldwide today.

The IEA also stated that more solar power generating capacity has been added worldwide since 2010 than in the previous four decades.

It is important to highlight that the two reports do not represent a forecast, but detail the expected technology improvement targets and the policy actions required to achieve the mentioned vision by 2050, highlighting priority actions and milestones for governments, research and industry stakeholders.

Hopefully the South African government will also incorporate the recommendations highlighted in these reports in its plans for responding to our future energy requirements.