Greenpeace Africa activists and members of coal-affected communities presented a petition, signed by more than 25 000 people, on 16 October 2014 to the National Air Quality Officer, Dr Thulie Mdluli, urging her to reject Eskom’s application for long-term postponements from complying with air quality legislation.

Research indicates that if Eskom’s coal power stations do not comply with the Minimum Emission Standards, it will cause up to 20 000 premature deaths in South Africa. If Eskom’s application is therefore approved, thousands of people in the coalfields of Mpumalanga will continue to bear the health burden of living in the shadows of coal power stations. 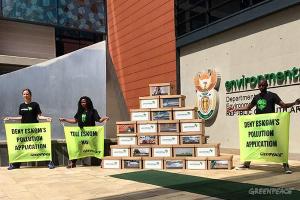 As part of the handover function, Greenpeace Africa activists built a wall of boxes containing the names of the people who supported the petition, and also rolled out a “green carpet” for Dr Mdluli, which she kindly walked down to accept the petition.

Given the public response to the petition, there is clearly much support behind Greenpeace Africa’s efforts aimed at ensuring that Eskom complies with the law.

“Greenpeace believes that no-one should be above the law, not even Eskom. The constitution states that South Africans have the right to an environment that is not harmful to their health or well-being, and we urge the National Air Quality officer not to overlook that”, stated Michael O’Brien-Onyeka, Executive Director of Greenpeace Africa.

In addition, President Jacob Zuma also made some interesting comments regarding pollution and climate change on 17 October 2014 in Pretoria. Speaking during the official opening of the Department of Environmental Affairs’ new “green building” head office, named Environment House, he called on all South Africans to work together in the fight against climate change.

“Our economy will become resilient to the possible effects of climate change only when we take bold steps like the reduction of emission of carbon dioxide and other gases that lead to increasing global temperatures”, Zuma stated.

So, let’s stop paying lip service to issues such as pollution and climate change, and demand that the necessary action is taken against Eskom and other entities ignoring the law and guilty of harmful environmental and health practices.