I’m using my participation in this race to support the work of the END Fund, an organisation at the forefront of international efforts aimed at controlling and eliminating the most common neglected tropical diseases (NTDs).

To better understand the unique role and contribution of the END Fund, especially in Africa, it is important to first understand the meaning of NTDs.

NTDs are a group of parasitic and bacterial infectious diseases that affect over 1.6 billion of the world’s most impoverished people, including more than 800 million children. Approximately one-sixth of the world’s population suffer from at least one NTD. The NTD burden is greater than that of malaria or tuberculosis, and ranks among the top four most devastating groups of communicable diseases.

NTD hotspots around the world: 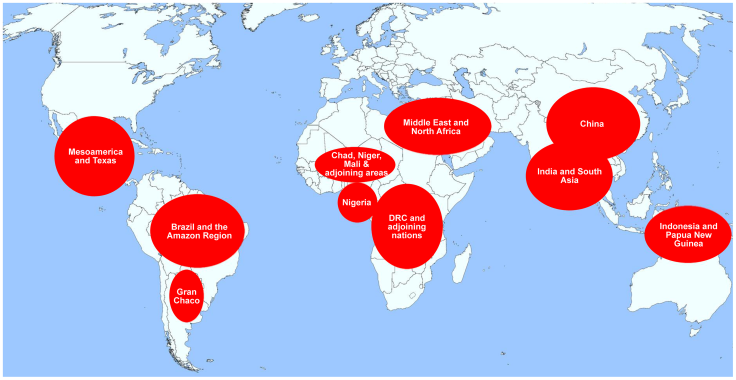 Refer to http://www.who.int/neglected_diseases/diseases/summary/en/ for a description of these diseases.

These diseases cause severe pain and long-term disability, result in lower worker productivity and the availability of a sufficiently healthy and available work force, and increase the risk of maternal mortality. Amongst children, infection leads to malnutrition, cognitive impairment, stunted growth, and the inability to attend school.

NTDs are a symptom of poverty, and historically have not received as much attention as other diseases in public health policy and interventions. They are called “neglected” because they generally affect the world’s poor living in remote, rural areas or urban slums. NTDs are spread by insects like mosquitoes and flies, or through contact with contaminated water or soil, and tend to thrive in developing regions of the world where water quality, sanitation services and access to medical are limited. Conflict situations or natural disasters aggravate conditions that are conducive to the spread of these diseases.

Without sustained progress in reducing poverty, the conditions conducive for the prevalence and spread of NTDs will remain. This challenge was best summarised by UN Secretary General, Ban Ki-moon, when he stated in October 2013 that “I share your view that poverty reduction and the elimination of NTDs go hand-in-hand.”

Forty percent of the global burden of NTDs is in Africa. Eliminating these diseases in Africa and elsewhere therefore have to be linked to efforts aimed at addressing the root causes of poverty.

Increased public awareness and understanding of NTDs also need to be part of this process.