“At first I was running away from the pain, the suffocating rage but eventually, running became a coping mechanism which to this day has become my SACRED SPACE where I get to heal, clear my head, but most of all where I get to CONQUER…”

Zanele Hlatshwayo is a marketing and technology expert, and in her current role at Google supports and advises brands in building media and marketing strategies for YouTube across South Africa, Kenya, and Nigeria.

She is also an ultra-marathon runner, and on a mission to use her running to raise funds and awareness about depression and suicide in South Africa.

In early 2018 she started a campaign called #Rise18, and her goal is to run 18 races between January and July to raise R180 000 for the South African Depression and Anxiety Group (SADAG).

She has already completed 17 races, including the Comrades Marathon and Two Oceans Marathon, and this afternoon, will start her final and toughest race – the Washie 100 Miler (162 km race in 26 hours), all in the quest of meeting her R180 000 target.

Zanele launched the #Rise18 campaign in honour of her father who committed suicide in 2010, and aims to demystify mental illness. Suffering from mental illness is not a sign of weakness, and committing suicide is not an act of cowardice. Given the lack of understanding and misconceptions about mental illness, people who suffer from it may not be receiving sufficient support since many are scared to speak up due to fear of being labelled as weak by friends and family.

In South Africa, 23 people commit suicide daily, and globally, every 4 seconds someone commits suicide. SADAG receives over 400 calls daily and needs help to continue supporting those in need of its services. It is for these reasons that Zanele decided to “Rise”, not only for herself but for others who are suffering in silence. 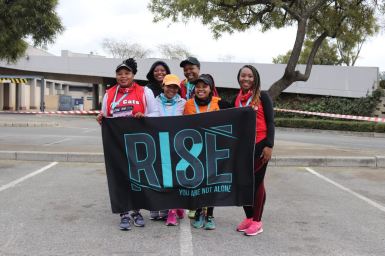 She has raised more than R115 000 for SADAG since January, and is committed to achieving her overall fundraising target. In addition, she has also started a YouTube channel called #Rise18, where she interviews people who have survived depression or being suicidal. The purpose of these stories is to give hope and demonstrate that people are not alone, there are many others out there who are suffering from depression but managed to find ways of leading positive lives despite their circumstances. The #Rise18 campaign has also sparked conversation in South Africa and has been featured on print media (Sowetan, Daily Sun, Runner’s World, Daily Dispatch, etc.), radio (Kaya FM, Power FM, Metro FM, SA FM, Ukhozi FM, Radio 2000, 702, etc.) and television (SABC 2, SABC 1 and eTV).

Implementing the #Rise campaign, in-between a hectic work schedule, many hours of training and running races, requires serious commitment and dedication, and Zanele has learnt many valuable lessons which could benefit others also planning to use sporting activities in support of a cause or organisation. These include:

Zanele’s awareness-raising efforts on depression and suicide will not come to an end once she finishes the Washie. This is only the start of her journey in making a difference in the lives of others, and the lessons and achievements of the past few months will form the foundation for future Rise18 plans.

“Let’s Rise in helping the suppressed who feel alone, let’s Rise by demystifying depression and suicide, let us Rise by lending a helpful hand to those who need it.”

This is the second Sport 4 Good profile of my 2018 #NGOs4Africa Campaign.