Another week of my #NGOs4Africa has come and gone. Three weeks are done, and it is now only four weeks to go before the start of the 2018 Fire and Ice Ultra in Iceland.

This final stretch before a big multi-stage desert race is always a hectic and sometimes stressful time for me, with many last-minute preparations, including final training sessions, and checking and re-checking of all the food, gear and equipment which I will need in Iceland. I also have to maintain the momentum of my #NGOs4Africa campaign and ensure that I achieve the objectives with I set for myself.

South African NGOs, as part of the broader civil society landscape, have played a critical role in the fight against apartheid, and continue to be at the forefront of the fight for social justice, the protection of human rights and the strengthening of democracy in our country. The role and contribution of many NGOs’ date back to before 1994, while others were only established after the dawn of a new political dispensation. Throughout my #NGOs4Africa campaign, I am aiming to profile organisations with both long and distinguished track records, or young and innovative newcomers, which are making a significant contribution in South Africa and elsewhere in Africa.

During the past week, I profiled six more South African NGOs – amandla.mobi, Community Development Resource Association, Legal Resources Centre, Institute for Justice and Reconciliation, Democracy Works Foundation and the Ahmed Kathrada Foundation – all unique in their own right, and examples of the important and diverse work performed by the NGO sector.

I also published two guest articles by Nomvula Dlamini, Director of the Community Development Resource Association, and William Gumede, Executive Chairperson of Democracy Works Foundation, which focused on “What does the current South African context ask of NGOs?” and “How civil society has strengthened democracy in South Africa”, respectively. Both articles provide important insights into the state of the NGO sector in South Africa, and the challenges and opportunities facing NGOs to remain relevant.

I also introduced the second Sport 4 Good profile, which focussed on Zanele Hlatshwayo, who in honour of her father who committed suicide in 2010, is using her passion for running to raise funds and awareness about depression and suicide through her #Rise18 campaign.

After five consecutive weeks of running more than 100km per week, I took it slightly easier during the past week. I spent less time on the road, and more time in the gym working on leg strength and conditioning. I have never been a big gym fan, but sometimes you just have to do what is required. Finished off the week with an easy 40km Sunday morning long run.

Finally, I also joined Rian van Heerden and The Scenic Drive crew on Jacaranda FM for a chat about my desert running adventures, the Fire and Ice Ultra and my #NGOs4Africa campaign.

Looking ahead, I will use the coming week to profile a number of prominent NGOs from elsewhere in Africa, and publish three guest articles by NGO leaders and experts on the challenges and opportunities facing NGOs in Africa. I will also introduce the third Sport 4 Good profile focussing on someone who has pledged to hike up Table Mountain every day in 2018 to raise R1 million for three organisations.

Finally, a blast from the past. The images below were taken during the 2012 Namib Desert Challenge in Namibia. The Namib Desert is one of the most beautiful deserts in the world, and this was one of my most interesting and enjoyable desert races to date. The 220km race was held at the end of March 2012, and everyone was ready to confront the extreme heat of the Namib Desert. But surprise, surprise, we encountered non-stop rain and cold weather on the first three days which transformed the dry, dusty Namib into muddy, shallow lakes. But, despite getting wet in one of driest places on the planet, we were treated to fantastic Namibian food in the evenings, and only had to carry a few essential items in our backpacks while running. It was definitely a desert running experience with a difference! 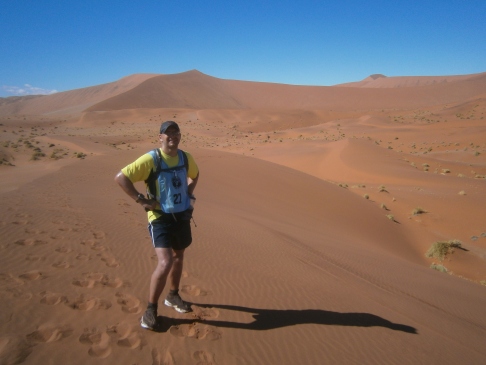 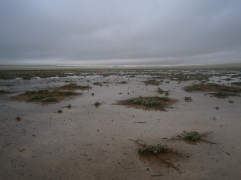