The New loveLife Trust, also known as loveLife, was established in 1999 as a joint initiative of leading South African NGOs, private foundations, and the South African government. Its initial mandate was to reduce new HIV infections and unplanned pregnancies among young people aged 15-24 years by half within a five-year period. As the organisation evolved, its focus has shifted to the promotion of youth health with the aim to influence positive social behavioural change amongst young people. The primary target group has also been extended to include youth from 10-24 years.

loveLife positions itself as a leader in transitioning young people from adolescence to adulthood by boldly and informatively promoting youth health. Its programmes are not only aimed at risk reduction, but also as the generator of empowered young people with a better future.

loveLife programming is based on the premise that in human development, the ages 10-25 years are times of rapid change, including “dramatic shifts in the shape of the body, major increases in gonadal hormones, and changes in brain architecture” (Eccles 2008, p. 198). For young people, defined by the World Health Organisation as aged 10-24 years, this period includes becoming more independent from the family, playing an increasingly “more active role in their own development” (ibid. 199), and of course, “taking on and then managing and coordinating multiple demanding life roles” (ibid.). 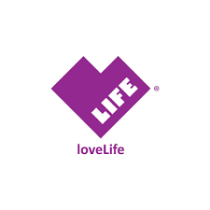 The loveLife model is rooted in young people’s agency. Its approach to promoting social change is to address root causes. Over the years, loveLife has developed its own construct to describe the various factors that promote positive youth-driven social change, called the “3-C” construct – Complete, Creative, and Connected.

Complete – loveLife uses “complete” as a way to describe self-belief, self-understanding, self-esteem, identity, purpose, and sense of belonging, and having a future focus.

Creative – for loveLife, creativity means resilience, “bouncebackability” after a crisis, creative problem-solving, and the capacity of those young people most marginalised and left out to take on a central role in determining their own, and their community’s futures.

Connected – for loveLife, connectedness means young people standing in solidarity, working together as equals, listening to each other and understanding where others come from, and the connection of all through shared humanity. It is the foundation of the themes of mutual respect and human rights within loveLife.

loveLife’s programmes that focus on young people in schools are slightly different from its out-of-school programmes. In the former, the emphasis is on the individual and interpersonal levels, and in the latter, it implements activities that aid in driving social and structural change.

The organisation’s implementation pillars focus on individual, societal and structural drivers of high-risk behaviour among youth through integrated multi-media messaging, community-level outreach programmes, as well as clinical and psycho-social services. loveLife’s Youth Health Programme Package consists of Healthy Lifestyles, Sports and Active Lifestyles, and Youth Development. Young people are inspired by their peers and listen to what they have to say. For this reason, loveLife’s positive lifestyle and healthy sexuality programmes are implemented by a national corps of youth volunteers known as groundBREAKERs (highly motivated peer motivators and community mobilisers between the ages of 18 and 25 years) and mpintshis (younger volunteers who shadow groundBREAKERs).

The groundBREAKER programme was established in 2001 as a peer education model where young people were trained on various programmes for implementation in schools and communities. The programme has since evolved, with a bigger focus on youth leadership, and three main objectives:

The programme has been successful in achieving these objectives. Its evolution follows loveLife’s realisation that unless the programme improved young peoples’ chances of employability and transition, personal development could not be fully realised. In the South African context, where employability is qualifications-driven, loveLife has opted to align the groundBREAKER programme to the National Qualifications Framework for accreditation, giving successful groundBREAKERs a NQF Level 4 qualification. On average, 65% of each year’s cohort of groundBREAKERs go on to find employment or study further, and almost 85% report increased health-seeking behaviour due to participation in the programme.

Y-Centres are vibrant, educational multi-purpose outreach centres where young people access a range of loveLife programmes. The range of activities and services offered include computer and work-related training, performing arts, sports, sexual and reproductive health, life skills, motivational programmes, the promotion of health and fitness, debating leagues, radio production and broadcasting skills development. Programmes are run under the management of the Y-Centre Managers with the support of groundBREAKERs and mpintshis.

loveLife franchises are existing community-based organisations which partners with loveLife to cater for the needs of young people in the community, similarly to what Y-Centres do. Various loveLife programmes are offered at the franchises which encourage and promote positive, healthy lifestyles through compelling and innovative programmes designed to inspire, develop and empower young people.

This is the forty-sixth NGO profile of my 2018 #NGOs4Africa Campaign.