Gender Links (GL) is a Southern African NGO, headquartered in Johannesburg, which promotes gender equality and justice across the fifteen countries of the Southern African Development Community (SADC) region.

Established in March 2001, GL is committed to an inclusive, equal and just society in the public and private space in accordance with the SADC Protocol on Gender and Development, and aligned to the Sustainable Development Goals, Beijing Plus Twenty, and Africa Agenda 2063.

Working with partners at the local, national, regional and international level, GL focuses on the following issues:

GL is an acknowledged champion of the SADC Protocol on Gender and Development and coordinates the Southern African Gender Protocol Alliance that campaigned for the adoption of this unique instrument in 2008. Aligned initially to the Millennium Development Goals, the Protocol brings together global and international commitments to gender equality. In 2016, the Protocol was aligned to the Sustainable Development Goals.

GL and 25 partners produce an annual SADC Gender Protocol Barometer which tracks progress towards attaining gender equality in SADC. The tenth edition of the Barometer was launched on 8 August 2018 at Constitution Hill in Johannesburg. The Barometer uses two yardsticks, the empirical SADC Gender and Development Index (SGDI) and the perception based Citizen Score Card (CSC). The regional SGDI has in the past year gone down from 61% to 59% and the CSC from at 65% to 62%.

“The work done by Gender Links and the Alliance and the related Gender Protocol Barometer which provides data to measure progress and identify gaps demonstrate the positive way in which civil society can work with governments to achieve gender- responsive governance through evidence gathering.”  Phumzile Mlambo-Ngcuka, Executive Director, UNWOMEN 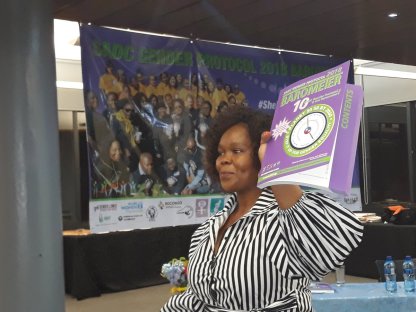 GL integrates the targets of the Protocol into its cutting-edge work on gender and the media that includes research, monitoring and on-the-job training of journalists. It is a global and regional thought leader on gender and media issues through chairing the Global Alliance on Gender and Media (GAMAG) and supporting 108 Centres of Excellence for Gender in the Media, including twelve public broadcasters. GL also works with 11 media training institutions that have opted to become Centres of Excellence for Gender in Media Education and form the steering committee of the Gender and Media Diversity Centre (GMDC). GL’s Gender and Media Progress Study (GMPS) conducted every three years is the most extensive such study undertaken in any region of the world providing a wealth of data for advocacy and action planning.

GL also uses the media to disseminate information to a wide variety of audiences. In its gender and governance work, GL spearheads the 50/50 campaign in the region, with a special focus on local government where GL works with councils in ten countries on gender-responsive budgeting and service delivery, with new areas like sexual and reproductive health and rights, as well as climate change, enriching this model. Pioneering work on the Sixteen Days of Activism campaign in the gender justice programme has expanded to include 365 day action plans to end gender violence, gender prevalence and attitude surveys in seven countries, and ground-breaking work on ending violence and empowering women. 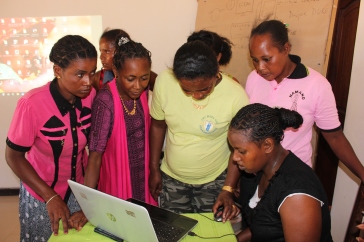 Gender Links has offices in ten registered SADC countries, including a Lusophone base in Mozambique and Francophone base in Madagascar. GL’s Botswana office also serves as a liaison office with the Southern African Development Community (SADC). Described in an evaluation as a “small organisation with a large footprint,” GL has a web of close to 600 partners, with 150 formal MOUs. Through its media and local government work, GL has over 500 institutional partners. There are 25 civil society partners in the Southern African Gender Protocol Alliance, and these connect with hundreds more NGOs, CBOs and faith-based organisations (FBOs) on the ground.

GL is a member of FEMNET and the Women’s Major Group, and partners with ministries of gender and local government, and the Southern African Broadcasting Association (SABA) on a Gender and Media Summit. GL shares learning with partners at annual SADC Protocol@Work Summits, and in 2016, held consultative meetings with Alliance and local government partners in all SADC countries on the Post-2015 agenda.

GL’s work has been widely acclaimed across the continent. In 2009, GL received the “Top Gender Empowered Government Agency or Parastatal Award” from the Top Women Awards, and in October 2010 won the “Investing in the Future Award” administered by the Mail & Guardian newspaper for its Gender Justice and Local Government Summit. GL has been a finalist three times in the “Drivers of Change Award – Civil Society Category” administered by the Mail & Guardian and the Southern African Trust. In 2013, the African Union recognised GL’s outstanding contribution to women’s rights during the tenth anniversary of the African Charter on Human and Peoples’ Rights on the Rights of Women in Africa, and in March 2017, GL received the “Investing in the Future Award” administered by Mail & Guardian.

Click here to make a donation to Gender Links.

This is the thirty-fourth NGO profile of my 2018 #NGOs4Africa Campaign.