The Democracy Development Program (DDP) was initiated in 1993 as a partner project of the German Konrad-Adenauer-Stiftung (KAS).  DDP is a non-partisan, non-profit organistion which aims to deepen the practice of democracy in South Africa by building strong and active communities that can hold those in power to account.

DDP endeavors to accomplish this mission by encouraging citizen engagement with burning issues in politics and development, convening public and political forums that encourage peaceful and constructive dialogue, providing democracy education, observing elections, strengthening civil society and community voices, and building functional and effective relationships between communities and local government. It advocates for an active, informed and involved citizenry contributing toward a transformed society and responsive government, through a strong, organised civil society that actively promotes a culture of democracy and supports the development of connected, purposeful and active communities. 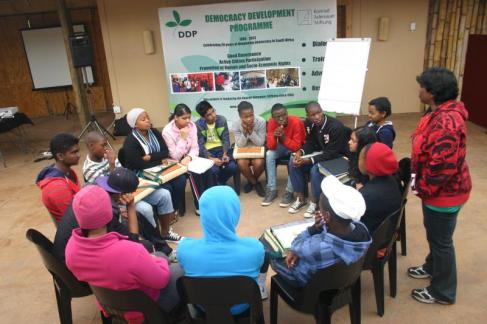 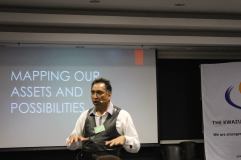 DDP’s Partners in Transformation project was first introduced in 1997 to create and facilitate an enabling environment for sensible dialogue amongst elected representatives and communities at a local government level, enable communities and community structures to understand functions of local government, and inculcate the spirit of partnership between local communities, municipal councilors, traditional leadership, and all other community-based and recognised structures.  To date, DDP has run this initiative in several municipalities with thousands of participants. Manuals developed for this project have also been used by other NGOs to facilitate learning and interaction at local government level.

DDP’s Cities Alliance Project, in partnership with DUT’s Urban Futures Centre (DUT-UFC) and the Africa Solidarity Network (ASONET), aims to develop a network of partners who can inform a city-led response to migrants in Durban, as well as develop a strategic report that focuses on social inclusion, integration and participation for the city of Durban.

DPP, in conjunction with ASONET and the Foundation for Human Rights (FHR), has also hosted a number of dialogues to investigate whether there is women and community participation in UMlazi, Durban, Ngonyameni and Inanda, and to assess whether women and the community know their rights and have the voice to exercise them freely. According to the facilitator and Secretary General of ASONET, Daniel Dunia, these dialogues were motivated by how women and communities from semi-urban areas are marginalised because of their gender and lack of development in their areas.

Since 2004, DDP has created an annual learning and sharing platform for approximately 200 local government practitioners, academics, parliamentary portfolio committee members, members of parliament and civil society organisations from across South Africa.  These conferences are accompanied by the publication of cutting-edge papers which disseminate alternate thinking and critical policy contributions. These events are entirely organised by DDP and funded by the Konrad-Adenauer-Stiftung. Upcoming conferences include the Social Cohesion Conference on 26 September 2018, and the Local Government Conference in November 2018.

DDP has also been involved in each of South Africa’s elections through the education of communities on the importance of participation in government activities, voter education and encouragement of active citizenship.  DDP has partnered in these activities with various faith-based organisations, non-partisan NGOs and community-based organisations. DDP, in collaboration with the KwaZulu-Natal Christian Coalition, has recently re-launched the KwaZulu-Natal Democracy and Election Forum (KZNDEF) in preparation for the 2019 national elections. Consisting of several sub-committees, DDP is responsible for the civic and voter education component of the work and is a member of the Forum’s steering committee.

DDP’s “citizen engagement public forums and community dialogues” aim to provide citizens with a transformational space where they can engage together with civil society organizations about matters that openly affect democracy in South Africa. In these spaces, DDP brings together experts such as policy-makers and political analysts to inform and educate citizens about democracy with the intention to mobilise and activate further conversations in their respective communities. Issues covered include poor governance, corruption and or the abuse of state power. DDP organizes these spaces (public forums, dialogues, radio dramas and talk shows) to create political awareness amongst citizens and to construct a solid platform for civil society organisations to hold those in power to account.

Another core focus of DDP’s work is to conduct capacity-building workshops for civil society organisations and encourage information-sharing amongst them. DDP believes that a vibrant and engaged civil society is at the heart of a strong democracy. For this ideal to be realised, citizens must be encouraged and empowered to engage with one another and with the state, and they must be equipped with knowledge on a range of pertinent issues.

This is the forty-fourth NGO profile of my 2018 #NGOs4Africa Campaign.