The Minister of Energy, Tina Joemat-Pettersson, announced earlier this week that she signed a partnership agreement with Russia’s state-owned nuclear company, Rosatom, in support of a large-scale nuclear power plants procurement and development programme for South Africa. This agreement could lead to the construction of up to eight new nuclear power plants with Russian VVER reactors with total installed capacity of up to 9.6 gigawatts.

It is no secret that South Africa already faces serious electricity supply challenges, and this situation will only get worse given our growing population and future economic development requirements.

But is the proposed shift to nuclear energy really the solution to South Africa’s electricity requirements? It will take at least ten years for any electricity to be generated from the new nuclear power plants, the price tag of an estimated R1 trillion will put significant pressure on taxpayers and the fiscus, and in view of the recent nuclear disaster in Japan, issues related safety remain a concern. Even the National Planning Commission, which drafted the National Development Plan, cautioned that South Africa should think twice about nuclear energy.

Our current experience with big, capital-intensive, power station projects such as Medupi is also highly problematic given the numerous delays in finalizing the project and significant cost overruns.

Ultimately, we need to reduce our dependency on coal-fired electricity generation. 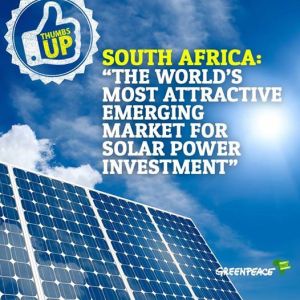 Everyone already seems to know what our leaders don’t want to acknowledge and understand – we have an abundance of renewable energy sources – solar, wind and water – which should provide the foundation for responding to South Africa’s future electricity requirements.

But it seems decision-makers keep on mapping a road ahead with their heads in the sand. Renewable energy offers South Africa many opportunities, and the cost of implementation will be reduced drastically over the next ten years, which is not the experience with big infrastructure projects. Renewable energy is the answer. It is fast to build, clean and will create far more long lasting jobs.

Let’s hope both common and economic sense will prevail before we commit ourselves to a nuclear energy future.